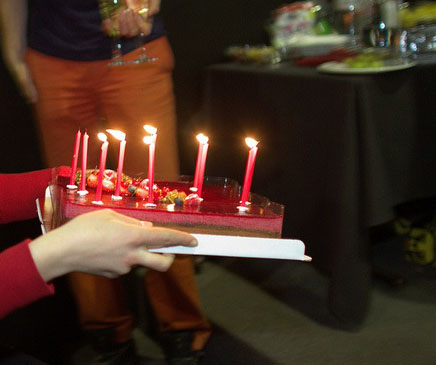 Pixelache 2002-2012
09 November 2011, Nathalie Aubret
Pixelache is turning 10 in 2012 already!
Every year since 2002, Pixelache Helsinki has shown a different face, continually searching for new strategies to present fresh and inspiring projects on the interstices of experimental art, design, research and activism. Pixelache continues in 2012 to explore new production models, with an emphasised focus on all-the-year-round activities, which consider change holistically, towards social, bio- energy and human sustenance.

The 11th edition of Pixelache Festival in Helsinki will be held during 10-13 May 2012 in Arbis (The Swedish Adult Education Centre of Helsinki) and several other locations in the centre of Helsinki. It will be designed around one main seminar / presentation day in the BarCamp-style and the theme of “Do It With Others” (D.I.W.O.). The main theme explores how artists and cultural producers can work collaboratively with each other and audiences, to create new models of co-production of artworks/events with sustainability as the core goal. A call for proposals will be launched during winter 2011.

Pixelversity, the outreach & education programme of Pixelache Helsinki scene around the year, develops in 2012 around a set of themes, including for instance 'Renewable Festivals', 'Citizen / Public Space & Creative Neighbourhood Skills' and 'Ecosystem and Environmental Monitoring'. The Pixelversity programme is coordinated and facilitated by Andrew Paterson, consisting of presentations, workshops, camps, expeditions and other events: some of which share and sustain ongoing local practice and others that support activity outside the usual locations, including the nearby regions.

The Suomenlinna Money Lab project initiated last spring by artist Christian Nold explores Suomenlinna island as a place of social, cultural and economic contact and exchange. The concept is to focus on ‘local money’ as a social medium for people, and a localised object that shapes and represents a geographical place. During the recent autumn, a series of workshops and experiments investigated the different ways that the social and geographical combine to create ‘local value’. The project runs in an open and participatory context, so anyone is free to join in and help direct the research. We are aiming to launch the local currency during summer 2012.