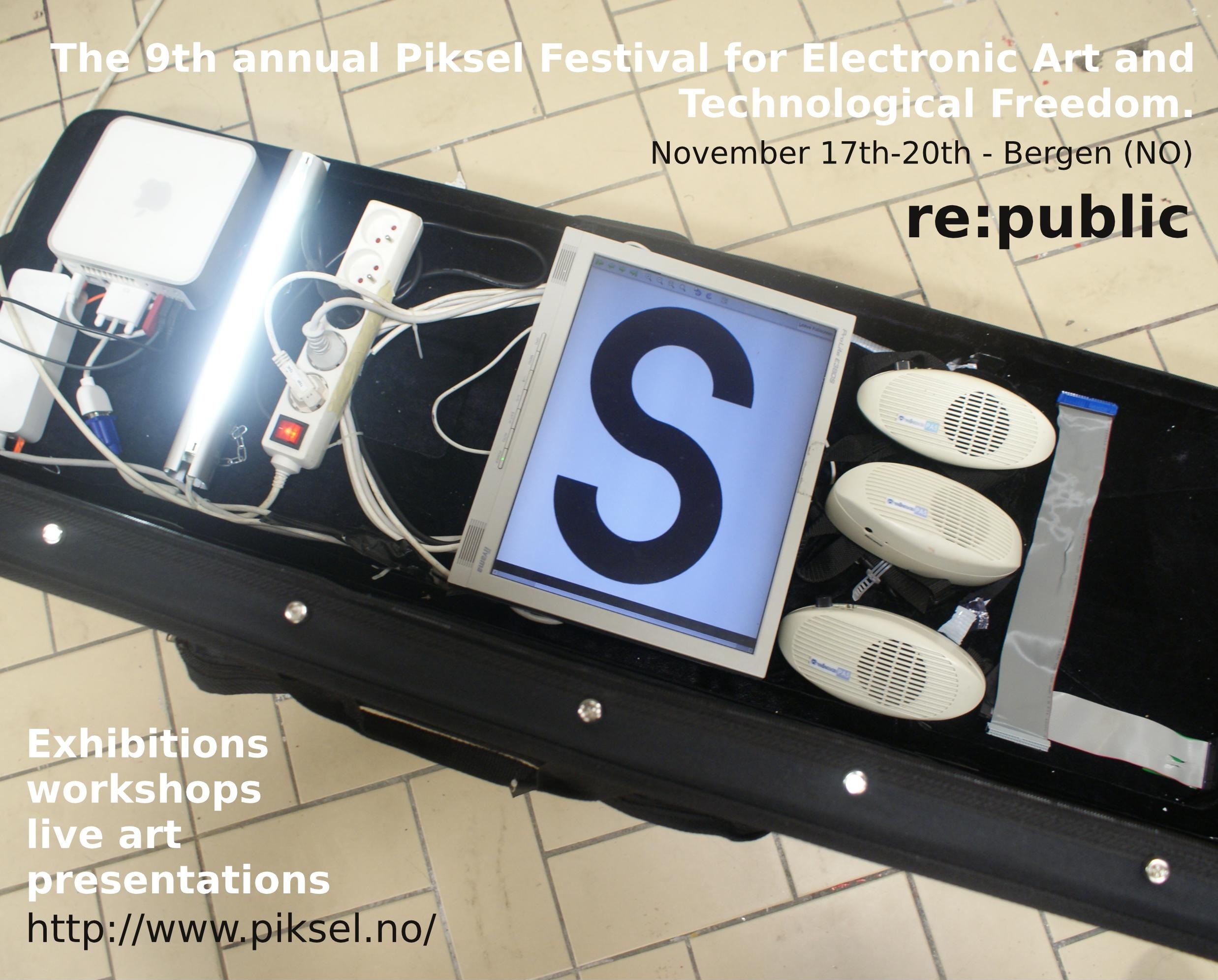 Piksel11 report
22 November 2011,
The 9th edition of the Piksel Festival took place on November 17th-20th 2011 in Bergen, Norway. The festival was subtitled this year as "re:public" for rethinking and redefining public space, both as a concrete physical space, and in a larger social and political context. As previously, through the nine-year history of the festival, Piksel is firmly grounded on free/libre and open source.

My primary reason to visit Piksel11 was a scheduled afternoon working session on open hardware and OHANDA with Jürgen Neuman and Alison Powell together with any Piksel-participants we could lure in. This turned out to be intensive three days of brainstorming instead. We started with extending our understanding of the open hardware to include all possible and impossible product categories. This was followed by communication-design-sprint for making the whole thing more understandable for the infamous "larger audience". Three days of work meant less festival program for me. Hence, my somewhat arbitrary picks below.

Montreal based coder/performer Jason Levine kicked-off the festival opening night at the Landmark with his visualized dance & beatboxing performance "Baudi(o) painting". Live, abstract graphics from kinect-tracked vocals were projected on top of the white-clad performer resulting to an "animation", where the body of the performer disappeared into the generated graphics from his voice. Excellent vocal skills combined with lagless graphics made it an immersive experience. Previous recording of similar style can be found here.

MP19 is an analog audio hacker collective (I think) who run a workshop for building their analog sound effect tools, Disruptor (delay-modulator) and Schmutz (octaver). With mostly digital tools we use it is both refreshing and plain important to use & understand analog electronics in the context of human-technoogy relationship. These relatively simple circuit board designs are great platforms to learn how the electrons really travel around the circuit and effect or distort the sound. And it's seriously fun. My kits still wait to be soldered, but some taste of the tools can be found from here. All free/libre open source hardware as we like them, improve them and preserve them.

MP19 performed also with/within S∆G∆∆N group in their S∆G∆∆N_incoherent scatter show. Live data from satellites and radio frequencies created the soundscape where visuals of analog microcosmos were juxtaposed macrocosmos of live weather satellite charts. This immediacy and intimacy worked very well together and was conceptual enough to stay clear from the potential patronizing undertone of remixing world information data and surveillance theme.

Milkymist is an open hardware video synthesizer. It can do funky things for pixels, live, lagless from included cam, no computer needed. Sébastian Bourdeauducq is one talented hardware designer behind this beauty and If you are not in immediate need of powerful video synthesizer, don't let the box fool you. You could repurpose it to an electronic brain for pretty much any need you can think of. If you're ok with low-level FPGA hacking that is, which I'm sure you are. NASA used it's memory controller bit for their space... you know, things.

"Silicone Bake" -performance ended the saturday evening at USF with a wonderful contrast from the predominant "corporeal volume" of the previous performances with singing, acoustic guitar & live-coded beats & bases. Live coder Alex McLean with his Tidal music improvisation software collaborated with singer/guitarrist (&FLOSS advocate) Jake Harries. The lyrics of the "3.5 minutes pop-songs", sung beautifully by Jake Harris, were all from spam emails, with themes of love, death and counterfeit watches. Reading the projected Alex's coding on Tidal was surprisingly effortless and entertaining. The low light & mellow sounds carried us back in time to the intimate small-club-feel of the best MTV Unplugged gigs in mid 90's, only to be interrupted by frequent and hysterical bursts of laughter from the spam lyrics.

With my designer hat on, I must give my thumbs up also for APO33 of their Piksel11 logo (stream machine). This physical sculpture of computer gear forming the Piksel characters streamed the live audio and web radio from current and previous Piksel events. It was very nice to see and hear this in real life after getting to know it first in the festival communications material. Festival identity with the live festival pulse indeed.

I missed a lot, especially the Zero Dollar Laptop presentation from Jake Harris, The Pixelache Software of the Year 2012 "din is noise" live sessions, Andy Gracies Proxy and other Galleri 3.14 installations, but most of this is nicely described and linked on the Piksel11 website for us.

Thank you Piksel11 for the inspiration and hospitality. Keep it real, keep it free.
And remember kids, don't copy – replicate.