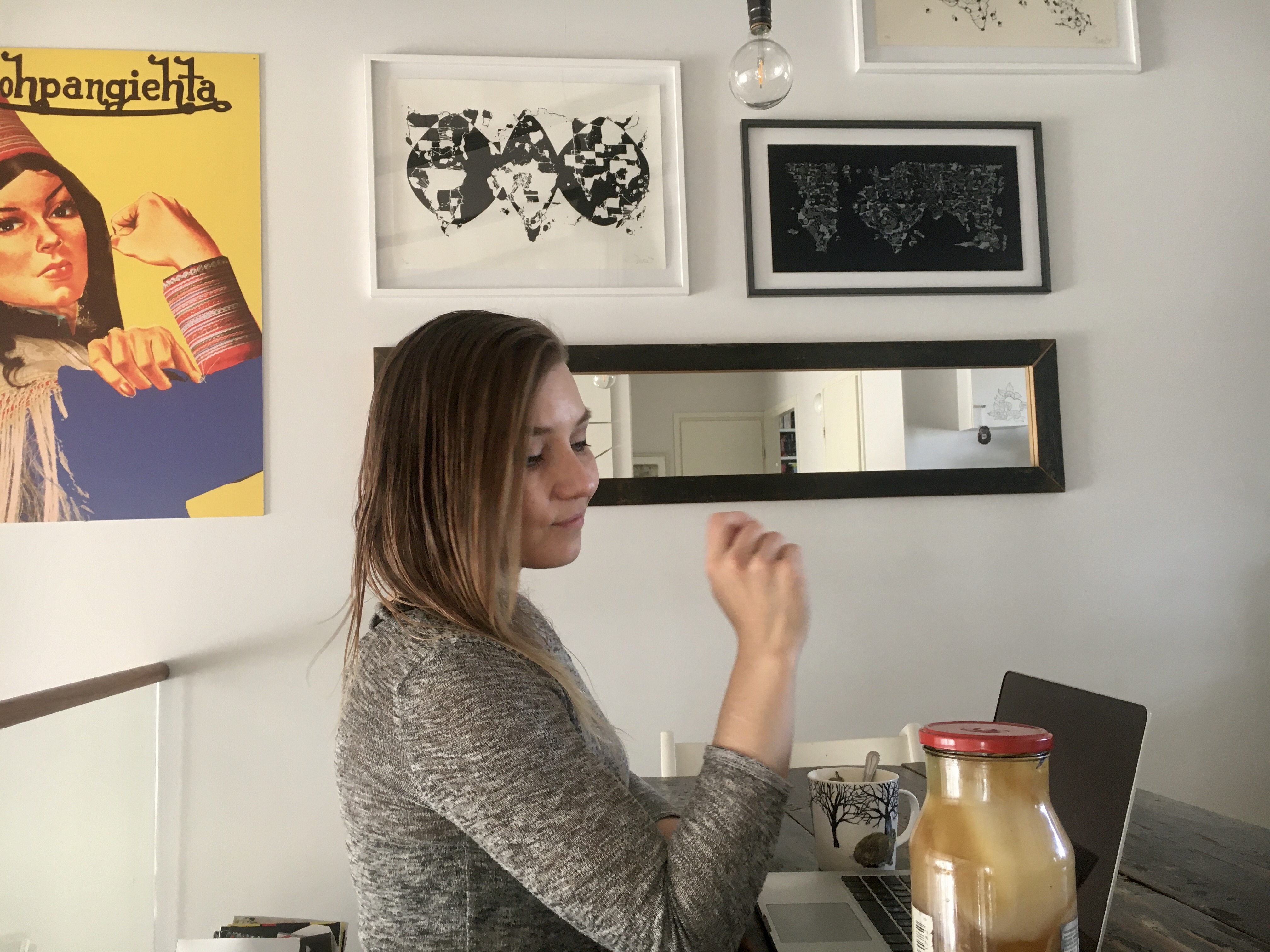 Notes from a Co-Director: Into the Unknown
10 April 2021, Laura Gustafsson

I’ve learnt to work with and within insecurity. It might even be that many times I have actively chosen the lack of certainty. Rather than a disruption, not-knowing the outcome has been a method in my life and work.

In early 2020 Andrew Gryf Paterson contacted me after Ville Hyvönen had suggested my name to co-curate the coming Pixelache Helsinki festival. I almost ignored his message request as I can’t read the Cyrillic letters with which he had written his name in Facebook. I figured it wisest to reveal my ignorance. Of course I was aware of the event, but I had never attended. My image of the festival’s overall programming included different kinds of technological gadgets, audio works realized with experimental equipment, and perhaps the fungi branch of bioart. None of which I knew anything about. But if that is not a problem I will surely participate in, I answered.

I found the first open call letter extremely elegant, yet cryptic. I’m still not sure what exactly is the objective of title #Burn___ or how it’s supposed to be written. What I did grab from the letter was the idea of resilience and recovery. Something has burnt down. From the ashes will rise everything that is to take its place. And we just might have a little chance to cultivate the things we wish there to grow.

Last summer I read the 1st open call submissions for site-specific works for Oodi. Some of the videos excluded, I wasn’t able to visualize the piece or suggestion behind any application: how they would look, what would be required to realize them, sometimes even what exactly was proposed. I made my decisions on the basis of which ideas and thoughts woke my curiosity.

There were several Pixelache members & several guests like me involved in the curatorial process and the decisions were made in a dialogue which I am certainly happy about. Later though, when it was just me and Andrew, I understood I couldn’t get the slightest idea about some of the works selected no matter how hard I read their descriptions. I don’t mean this as a bad thing. I think it’s quite unreasonable to expect an artist to be able to define what will happen when it hasn’t happened yet. There is no point in creating if one already knows what the creation will be.

In the numerous discussions we have had with the artists during the year, I’ve been able to grasp a tiny impression of what the participants are about to do and what it is they wish to communicate. All the conversations are in English though, and it is the first language for only a few of us. Some things are probably lost in translation or hit the language barrier. I worry the moment I need to give more precise information about the thematic of the works. More than something I can articulate, it’s the (expected) bodily experience, feeling or atmosphere that has originally awakened my imagination. To be honest, only afterwards it is possible to tell what actually happened. For this reason, I’ve asked the essayist Silvia Hosseini to talk with me about the works during the festival.

Much of my ignorance was also due to the fact that I had not known at all the lively, blossoming network of cultural organizers, artists, activists, and researchers who either live or work in Finland or have some other connections with the country, but whose roots expand all over the world. My idea of the homogeneity of the Finnish cultural scene proved to be totally incorrect. It is no wonder though: it’s mostly the Finnish speaking actors validated by Finnish art schools that we see in media or in the programming of major organizations.

Later on in August, I was asked to co-direct the 2021 festival with Andrew. I have never organized a festival before but I know for sure it is not a walk in the park. I accepted the invitation for the respect I felt towards the enormous amount of work that had been going on for almost two decades somewhere in the periphery of my vision, and just beyond the sphere of my experience. It felt like a gift that these people who did not know me at all were ready to invest so much trust in me. I appreciate the conversations between me and Andrew, our producer Steve Maher and everyone else. I’ve even learnt to like the video calls which I absolutely loathed a year ago. They’ve proved to be quite a nice way to be in contact with people I don’t yet know but with whom I share a common ambition.

It’s not only me who has had the opportunity to enjoy the uncertainty. Organizing a festival during a pandemic is a new experience for all. Although some of us have already gathered experience on the topic (for instance, our communications manager Saša Nemec, based in Slovenia, just wrapped up a local event including an award for the most antifeminist deed of the year). We’ve been weekly informed about new restrictions. From early on it was clear that no one will sing (not even hum) in the elevator, nor will there be touchable objects hanging in the escalators. At the moment we are safe to assume that the second floor of Oodi, where we had located many of the works in our imagination, is not available in early June. We have asked the artists to come up with different solutions as there is not even a certainty at the time of writing that Oodi will be open to the public at all. Instead of just one festival, we have planned at least three alternative festivals for parallel futures. Only thing that is definite is that something will happen.

Early this year I was optimistic that things will get back to normal before June, and it’s possible to assemble a public event in Central Library. However we wanted to be prepared for everything, and arranged a second open call for audio. In case the live event would not be possible, we’d still have a nice radio programme. Curating the audio content was easier because most of the works already existed. One just had to listen to them (there were over a hundred submissions). Educated by the first open call, we asked everyone to argue how the piece relates to our theme. Some of the reasonings were further fetched than the others. I still enjoyed listening to the works. Encountering new art felt luxurious when there had been no access to museums, theatres or exhibitions for a while.

I understand the frustration many must feel because premieres are postponed and events are cancelled. I am mostly frustrated by the growing fear that we will not learn anything from the pandemic. The premises for this kind of global plague–the wiping out of habitats of other species and intensive farming of non-human animals–have not been challenged. It would feel absurd to insist on the opening of art institutions or permitting the events or even to demand the assured information of when things will be as they were. They might never be. From many perspectives that is utterly sad. But change is a necessity. It is inevitable.

Tolerating the uncertainty and not knowing is definitely a privilege. My situation is less precarious than that of many. Change of plans does not have a huge effect on me, and my finances are (at the moment) secured even if I won’t receive a certain grant or an exhibition gets cancelled. Resilience is not a property an individual can achieve alone. It is nourished and nurtured by the material and communal network one is attached to. I am very grateful to the Pixelache community that I have been invited to join.

Photos by Antti Ahonen The nights proceedings commenced with Program Facilitator, Andrew Paterson, reading from his freshly penned #Burn____ Open Call, this was followed by a preview of the 2020 programing by producer Steve Maher. First act of the night - Bees and Honey a performance by Eva-Liisa Orupold. This was followed by thecombined performancesofFolded Visualsand music fromthe Ultimate Dance Septet. Many thanks to Publics, Helsinki for allowing us to host the first of our years events. Stay tuned for more.....
Read more
Post: A Letter fae the Other Side / Pixelache #Burn____

A creative text written by Andrew Gryf Paterson, expanding upon the theme#Burn____ which connectsour Pixelacheprogramme 2020, towards the next Pixelache Helsinki 2021 Festival. Paterson is the initiator and lead facilitator of the festival, scheduledto be duringthe 2nd weekend of June 2021. This theme is reflected throughout the creative text in various ways, and is crafted fromhis posts to Pixelaching FB group [.TXT], and forms the basis of the open call for contributions that will beopenedand distributed in March 2020. Download the letter [.PDF, 55kb] directly, or click below...
Read more
Post: 2020 X 2021: The relationship between #Burn____ Program and the #BURN____ Festival

Pixelache's #Burn____ theme is unique in Pixelache's long andvaried history of thematic premises, in that it takes place over a two year period. Its two parts are comprised of, in short form: #Burn____ 2020 "Program" - which isan incubationand development year, focused on members' projects, 2021 festival design, and the legacy of the association. #BURN____ 2021 "Festival" - in which we will host one of our larger festivals in the association's recent history. This year 2021, and it's accompanying festival, will not only serve as the culmination of theprevious year's developmentand incubated...
Read more
Post: Pixelache 2021 Festival Tea Party, Online/Remote each Friday 15.00-16.00 EEST until Midsummer

Pixelache is excited to announcethe dates and locations for some of our early 2020 projects under the thematic mantle of #Burn____. Pixelache's 2020 #Burn____ programme is comprised of projects which are facilitated by members of our association. The first quarter of these events collectively, but respectively, address the idea of our perceptions of the current moment, reflecting on both the experiences of the mind and the body as we inhabit the context of contemporary environments. After a successful #BURN____ Launch event, the programme and the presented projects will explore...
Read more